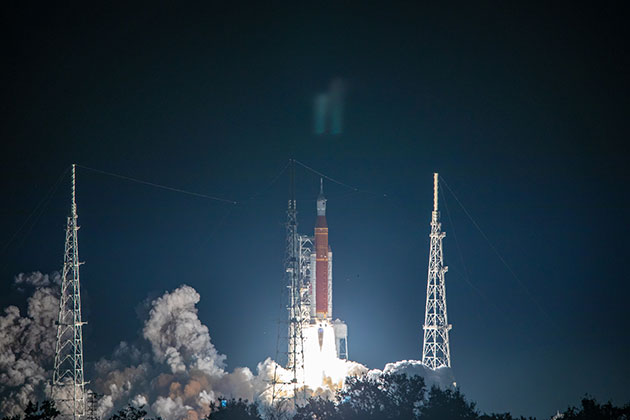 The Space Launch System rocket lifts off from Launch Complex 39B at NASA's Kennedy Space Center in Florida on Wednesday, Nov. 16 to begin the Artemis I mission.

The massive Space Launch System (SLS) core stage and solid-fueled boosters erupted to life Wednesday morning to launch the first human-rated spacecraft to the Moon in almost 50 years. Liftoff came at 1:47 a.m. Eastern time. After a series of perfectly timed burns, the uncrewed Orion separated from its SLS booster after less than two hours and is now on its way to lunar orbit.

Burning tons of fuel every second, the largest rocket since the Saturn V sprung off the launch pad at NASA’s Kennedy Space Center in Florida and rode a column of smoke and fire into Earth orbit before the Boeing-built core stage depleted its 733,000 gallons (2.8 million liters) of cryogenic propellant and dropped away to fall into the Pacific Ocean.

The Interim Cryogenic Propulsion Stage (ICPS), built by United Launch Alliance for Boeing, took over to first raise Orion’s orbit around Earth and then provide a critical acceleration to more than 22,600 mph (40,234 kilometers per hour) so Orion could escape Earth’s gravity and head to the Moon. Orion was released from the ICPS 1 hour and 55 minutes after liftoff. Orion’s flight test will take it on a carefully choreographed series of orbits around the Moon that will include moving some 40,000 miles past the Moon.

With Orion on its way out to the Moon, Boeing and NASA SLS teams celebrated the successful first launch of a booster that will be a keystone element of a new era of lunar exploration designed to create a regular and sustained presence by astronauts on and around the Moon.

“This was the launch all of us had worked so hard for,” said John Shannon, Boeing’s program manager for the SLS. “The core stage and upper stage performed brilliantly. It was a great testament to the diligence of our teams and the commitment of all of us to this mission.”

The core stages for the next three Artemis missions are already in production at the Michoud Assembly Facility outside New Orleans. The second core stage, which will launch the Artemis II mission, including astronauts on a mission around the Moon, is 4/5 complete and awaiting its engines. Core stages 3 and 4, slated to launch their respective Artemis flights, are in different stages of assembly, ranging from tank manufacturing to the welding of structural components. 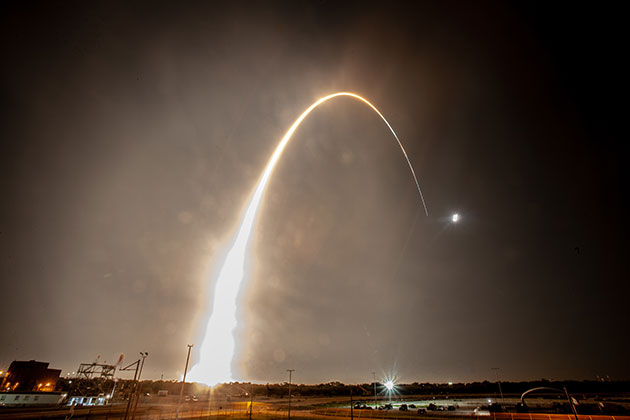 The Space Launch System rocket traces a brilliant arc over the Florida coast on Wednesday morning as the launch vehicle lifted NASA's Orion spacecraft onto a path to the moon for the Artemis I mission.