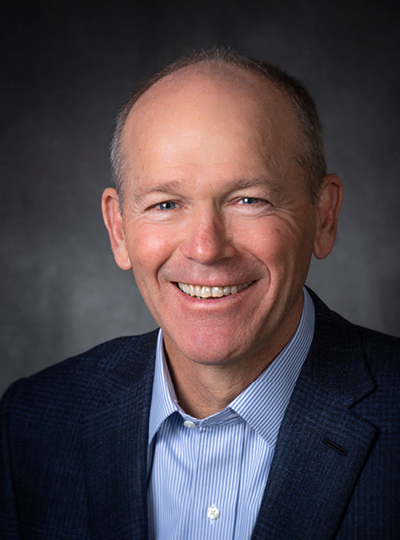 David Calhoun is president and chief executive officer of The Boeing Company, a leading global aerospace company and provider of commercial airplanes; defense, space and security systems; and global services. The company employs more than 140,000 people worldwide, leverages the talents of a global supplier base, and is a top U.S. exporter for commercial and government customers in more than 150 countries.

Calhoun became Boeing president and chief executive in January 2020. He has served as a member of Boeing’s Board of Directors since 2009 and served as board chairman from October to December 2019.

Calhoun has extensive expertise in a wide array of strategic, business, safety and regulatory matters across several industries as a result of his executive, management and operational experience.

Calhoun previously served as senior managing director and head of portfolio operations at The Blackstone Group beginning in January 2014. During his time with the investment firm, he focused on creating and driving added-value initiatives with Blackstone’s portfolio company CEOs.

Previously, he also served as executive chairman of the board for Nielsen Holdings from January 2014 to January 2016. He joined Nielsen in 2006 as chief executive officer shortly after it was acquired through a consortium of private equity investors, including Blackstone. Throughout his seven-year Nielsen tenure, Calhoun led the company’s transformation into a leading global information and measurement firm listed on the New York Stock Exchange and Standard & Poor’s 500 Index.

Calhoun began his career at General Electric Company (GE), where he rose to vice chairman of the company and president and chief executive officer of GE Infrastructure, its largest business unit. During his 26 years at GE, he held a number of operating, finance and marketing roles and led multiple business units, including GE Transportation and GE Aircraft Engines.

Calhoun has a bachelor’s degree in accounting from Virginia Tech.