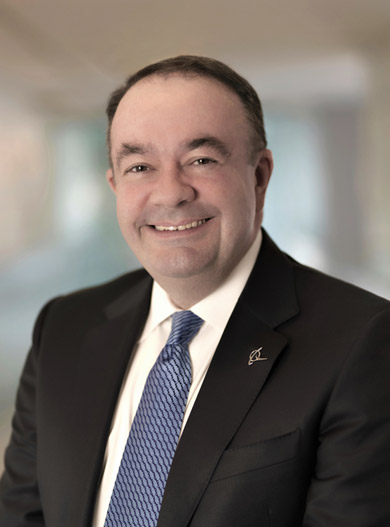 Ziad Ojakli is executive vice president of Government Operations at The Boeing Company. Appointed to this role in October 2021, Ojakli is responsible for advancing the company's public policy priorities, including all U.S. federal, state and local government liaison operations, as well as Boeing Global Engagement, the company’s global philanthropic organization. He also serves as Boeing’s chief lobbyist and is a member of the company’s Executive Council.

Most recently, Ojakli served as the managing partner and senior vice president of SoftBank from 2018 to 2020, during which he created and led the investment company's first global government affairs operation in support of all its legislative, regulatory and political matters. Ojakli previously spent 14 years at Ford Motor Company as group vice president, leading a global team that amplified the company's core business objectives and managed interactions with governments in 110 markets around the world. In that role, he also directed Ford's philanthropic arm devoted to supporting global causes.

Previously, Ojakli served in the White House from 2001 to 2004 as principal deputy for legislative affairs for President George W. Bush. Earlier, Ojakli was chief of staff and policy director for U.S. Sen. Paul Coverdell and held a number of additional U.S. House and Senate policy and legislative roles as he began his career.

Ojakli currently serves as chairman of the board of the Smithsonian National Zoological Park in Washington, D.C., and he is a board member of the Jackie Robinson Foundation and the Henry Ford Learning Institute.

Ojakli has a bachelor's degree in American government from Georgetown University.